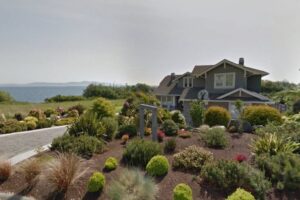 Gordon Head is a seaside neighbourhood in the greater Victoria area and the larger municipality of Saanich.
It’s north of McKenzie Avenue and East of the Blenkinsop Valley. The University of Victoria is partially located within this community along the southeast boundary. Gordon Head borders Cadboro Bay and encompasses Mount Douglas And the Mount Douglas Park. The neighbourhood shares its name with a small strip of land that juts out into Haro Strait just east of Margaret Bay. It’s named for Adm. John Gordon, who in 1845 commanded the HMS America in the North Pacific.

Gordon Head has 27 parks from the tiny 10th of an acre Balmacarra Park to the beautiful Mount Douglas Park featuring over 450 acres. Several of these parks offer beach access. The Mount Douglas Park is a prominent 225 m Hill overlooking the city. At the base of Mount Douglas is a mix of residential neighbourhoods, a few working farms, and agricultural land preserve. It has many trails including an old abandoned mine trail.
Gordon Had is part of the Greater Victoria school district and there are six schools within its boundary including two elementary schools (Hillcrest and Torquay), two middle schools (Gordon Head and Arbutus), and two secondary schools ( Lambrick Park and Mount Douglas).
The Gordon Head Recreation Centre is a centrally located community centre featuring a swimming pool, sauna, steam rooms, weight rooms, dance and fitness studios, and a skateboard park. There are several retail locations including Tuscany Village, University Heights Shopping Centre, and Torquay Village.

Homes in Gordon Head are priced from about $600,000 up to $3 million for beautiful waterfront estates, Waterview homes, and single-family properties. The better the view, the higher the price typically. These homes have several custom and standard features from 3 to 5 bedrooms, 3 to 6 bathrooms, and in sizes from 2000 ft.² to over 5000 ft.². Most sit on lots of around one 12:45 third of an acre.
For more information on Gordon Head and homes for sale therein, browse listings on my website or contact my office at any time.